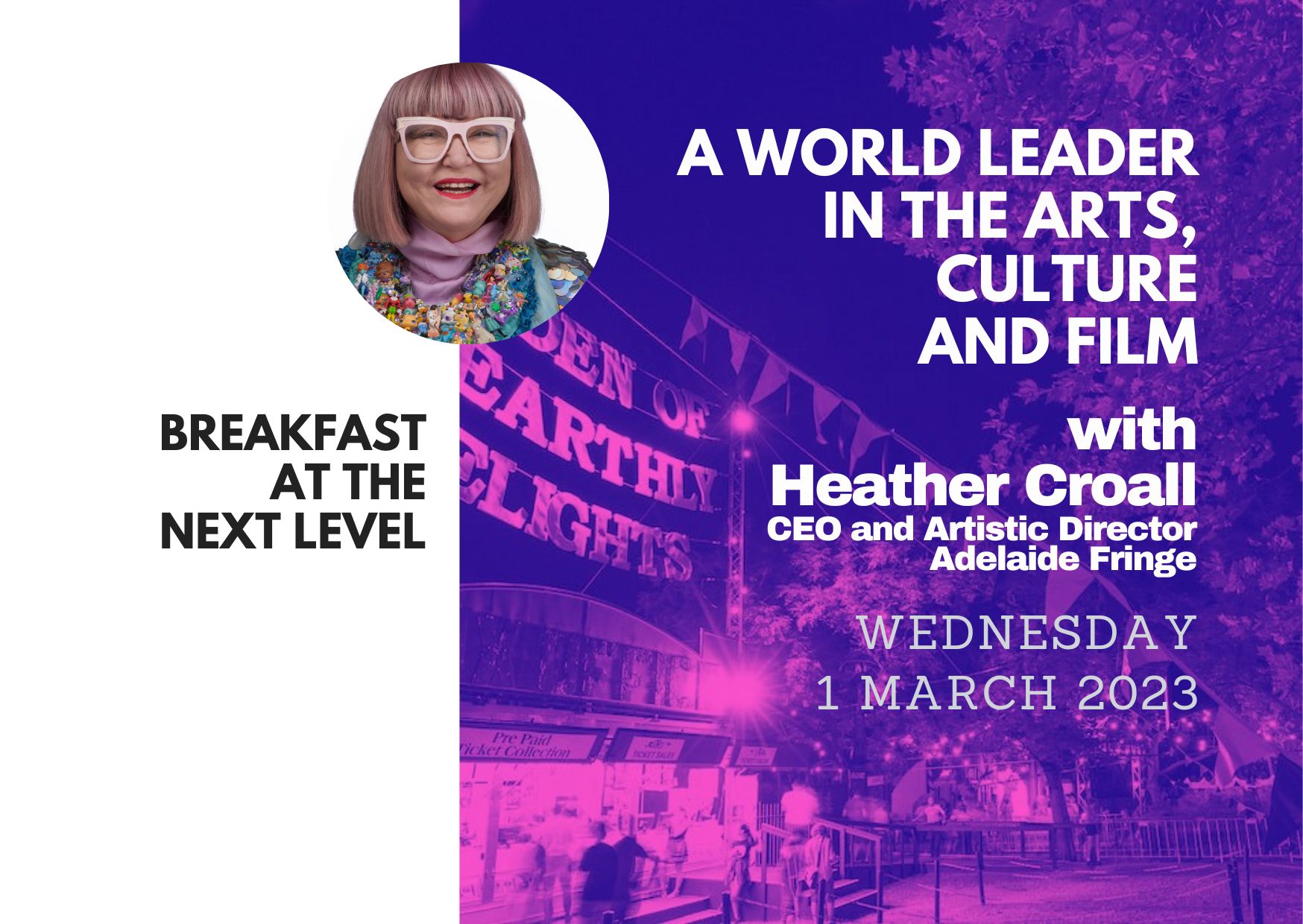 Breakfast at the Next Level | March 2023 | A World Leader in the Arts, Culture and Film

On the first Wednesday of the Month, some of South Australia’s most successful and motivated people get together over breakfast to discuss, learn, share and grow – personally and professionally.

Join Stan Kontos and the team at SOL Results for our next inspirational breakfast when we meet with Adelaide Fringe Director Heather Croall. Adelaide Fringe is Australia’s biggest arts festival, seeing the city transform into a magical summer festival playground for a month every year. Since 1960, it has been one of the most loved festivals in the world, and in 2015, Heather Croall took on the role of Director and CEO. Heather Croall has won the Festival Management CEO of the Year 2022 (Australia) as voted by CEO Monthly magazine.

OR ONLINE VIA ZOOM

Heather Croall is the Director and Chief Executive at Adelaide Fringe. Heather is known as a visionary in the creative sector. Under her leadership, every festival Heather has run has seen an increase in turn over, and been met with high critical acclaim.

About our guest Heather Croall

Heather is an experienced CEO and Director known as a visionary in the creative sector who delivers innovative festival programs, new audiences and organisational growth.

Under her leadership, every festival Heather has run has seen an increase in turn over, been met with high critical acclaim, delivered increased ticket sales and expanded audience demographic. Heather embraces adaptive and agile leadership methodologies and is known for implementing innovative digital platforms and systems that drive change and growth.

Heather is a filmmaker and has produced and directed documentaries for SBS, ABC, Ch 4 and BBC.

She first worked at the Fringe Star Club in the early 1990’s and also ran the film event, Shoot the Fringe from 1992 to 2002, then was Director at the Australian Documentary Conference before going to the UK to take up Festival Director and CEO role at the Sheffield Doc/Fest from 2005 – 2015.

Join us at Breakfast at the Next Level, on Wednesday 1 March 2023. The SOL Results team looks forward to welcoming you. Buy your tickets now to secure your place.

1079 Life and SOL Results presents BREAKFAST AT THE NEXT LEVEL

Breakfast at the Next Level | February 2023 | What it Takes To Create a World...