In 2008 he was awarded the Honorary Fellow of the Royal College of Surgeons Thailand for his contribution to the health system in Thailand.

In 1975 Professor David established the Australian Craniofacial Unit (ACFU) in Adelaide to provide the delivery of health care to the craniofacially deformed. He was Head of Unit from 1975 to 2017.
The multidisciplinary patient centred Unit has successfully bridged public and private sectors in Australia and has helped to bring university research, private industry and technology to the forefront of craniofacial treatments and knowledge.

Professor David has not just treated patients but rather developed a model of health care delivery based on 7 principles. The model has become the basis of a worldwide network employing the same principles with most run by surgeons trained in Adelaide by Professor David.
Professor David has published widely including authoring 5 books and many chapters and articles on craniofacial conditions, treatment and the delivery of healthcare.

In 1984, with the support of Australian community groups, Professor David founded the Australian Craniomaxillofacial Foundation as a means of raising funds for patient care, education and research. Professor David serves as President of the Foundation.
The Australian Craniomaxillofacial Foundation’s aim is to promote ACFU’s international role, to commission and promote research directed at improved patient outcomes, to develop and implement training and teaching courses worldwide and to manage ACFU’s overseas programs.

In recognition of his work Professor David received the Companion of the Order of Australia in 1988. Amongst his many awards, in 1990 he was named South Australian of the Decade and in 2018 was also named South Australian of the Year.
He was awarded the Tessier Medal (International Society of Craniofacial Surgeons) in recognition of his distinguished service to craniofacial surgery worldwide in 2019. 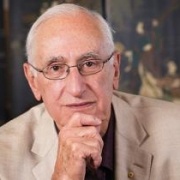 At Breakfast at the Next Level, on Wednesday 4th March 2020, we will meet Professor David David, founder of the Australian Craniofacial Unit. Professor David, an accomplished and respected craniofacial surgeon, retired from clinical practice at the end of June 2018. In his career spanning five decades, he received worldwide recognition for his excellence in restoring dignity for more than 17,000 patients from all corners of the globe with facial deformities and disfigurements.

Professor David officially established the Australian Craniofacial Unit (ACU) in 1975 with the approval of then-South Australian Premier Don Dunstan, providing services at the Women’s and Children’s Hospital and the Royal Adelaide Hospital. From the outset, the ACU has successfully bridged the public and private healthcare sectors in Australia, and brought university research, private industry and technology to the forefront of craniofacial treatments and knowledge. Inspired by Dr Paul Tessier, considered the father of craniofacial surgery, whom Professor David studied under in England and France before returning to South Australia, the ACU continues to operate as a multidisciplinary centre for patients from Australia, all of South-East Asia, from China to Indonesia, and other countries.

Patients receiving treatment are afflicted by conditions that are limiting, debilitating and, often, life-threatening. Deformities needing correction may include congenital distortion of the face and skull, cleft lip and palate abnormalities, facial growth anomalies, and tumours and other facial issues that require reconstructive surgeries. Other surgeries may result from the patient having been involved in an accident or suffering an injury through violence.
Professor David is reputed for his patient-first advocacy and his empathetic approach to medicine and surgery. Over his career, he has seen many patients with severe deformities go on to study and make a life for themselves.

“It doesn’t take much to be empathetic with the needs of a person giving birth to a child with facial deformities. The extraordinary humanity that comes out of that is humbling. Right from the moment of birth, we need to look and see what life is going to be like for the parents and the child. The deal is about setting up systems to enable people to get the best possible outcomes from all of the technologies and skills that are available, going beyond craniofacial surgery, and to do that with the best empathy that is possible,” Professor David said.

The care provided by the ACU is lifelong for the patient. Recognising that what is an insurmountable problem for one surgical field is routine for another, the full-time group of surgeons at the ACU are able to attempt to correct whatever situation they are presented with, strengthened by scientific and evidence-based protocols and measurable outcomes. The team of surgeons include those with craniofacial expertise, as well as neurosurgeons, micro surgeons, ear, nose and throat surgeons, ophthalmologists, and cardiologists. They are supported by health professionals such as anaesthetists, speech pathologists, paediatricians, psychiatrists, radiologists, dentists, and respiratory specialists, among others.

Last year, Professor David received the Tessier Medal from the International Society of Craniofacial Surgeons in recognition of his distinguished service to craniofacial surgery. In 2018, he was named South Australian of the Year. He is a Companion of the Order of Australia, and has been named South Australian of the Decade, among many other local and international awards. Professor David has authored six books and has had more than 250 articles published in various journals.

Join us for this special event. Enjoy the morning with the SOL team and fellow guests when we hear about the incredible work of Professor David David and his colleagues at the Australian Craniofacial Unit to perform “everyday miracles” for thousands of patients and their families.