Ian Steel OAM is the CEO for Kickstart for Kids. Kickstart for Kids began in 2009 by supplying breakfast to underprivileged children at three schools. At the time, he was also still running his own building supplies business.

In 2010, Ian attracted growing media coverage, a partnership with leading Adelaide radio station and sponsorship by a major Australian bank.

Today, Kickstart for Kids has 600 community-minded volunteers who deliver approximately 50,000 breakfasts in more than 350 schools around South Australia, and 10,000 lunches per week. Kickstart for Kids also offer mentoring for underprivileged children.

Camp Kickstart has also been launched, a free school holiday program for disadvantaged kids. Those involved in the program have seen a marked improvement in children’s attitudes and behaviours.

Ian has won numerous awards for his work with disadvantaged children including recently being the recipient of an OAM, South Australian of the year finalist and winning Entrepreneur of the year. 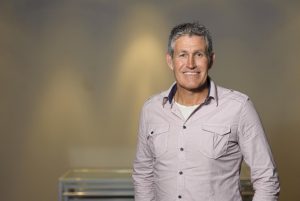 Read more
44 – The importance of being forgiving